Livable Streets is a Seattle Children’s initiative, associated with the Seattle Children’s Major Institution Master Plan (MIMP), and a collaborative effort with the LCC and Northeast Seattle Neighborhoods to enhance the livability of our area as the hospital grows. We’re spending nearly $4 million on pedestrian, bicycle, and other transportation projects in NE Seattle as part of our 20-year plan. To date, Children’s Livable Streets completed investments total approximately $1.5 million and include a remaining balance of approximately $ 2.5 million to be invested during future phases of growth.

Seattle Children’s celebrated the completion of Livable Streets Phase One on Saturday, June 14, 2014, with a community-focused neighborhood party. If you weren’t able to make it to the celebration, please tour the bike and pedestrian improvements on your own and tell us what you think, thank you!

The Livable Streets Initiative launched in 2010. Seattle Children’s and our co-sponsors held a variety of events to gather input and ideas, including a walking audit of the pedestrian environment in the neighborhoods surrounding the hospital led by Feet First, a local advocacy organization promoting walkable communities; a survey of cyclists by Cascade Bicycle Club, a 13,000-member local organization promoting bicycle activities, advocacy, and education; and a large public event at Gould Hall in the University of Washington campus, where hundreds of participants shared their ideas and inspirations for how to make streets safer, more friendly and more efficient. In addition, community members made comments on an interactive web-map and submitted suggestions via email.

The process, the initial project list, and the completed project list is documented in the Completed Phase-1 Project Report.

We’ve already heard feedback telling us the newly completed projects are making a difference as community members walk and bike around Northeast Seattle. We encourage you to discover #livablestreets yourself. Tweet your experiences (and photos!) to @SeattleChildren.

This project turned a confusing intersection into a safe Burke-Gilman Trail connection for neighbors and staff. In partnership with SDOT,the traffic signal and redesigned intersection at 40th Ave. NE  have made it easier to cross four lanes of traffic at this busy spot. The new intersection features many elements that maximize safety and improve operations and designates a crossbike zone for bikers, allowing them to ride the protected intersection parallel to the new pedestrian crosswalk. 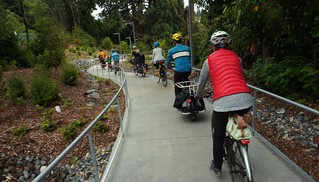 This ADA-accessible path provides a crucial link to the Burke-Gilman trail. Seattle Children’s worked with neighbors on designs for this project to create safe trail access while stabilizing a steep slope and protecting a grove of three sequoia trees. The path features include railings, benches, native plantings, and a community information kiosk. 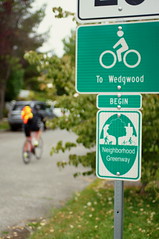 Greenways are residential streets where traffic moves at slower speeds and people feel safer and more comfortable walking and biking.We partnered with the Seattle Department of Transportation and Seattle Neighborhood Greenways to build one of Seattle’s first Greenways, creating a low-stress route between Wedgwood and the Burke-Gilman Trail. The project includes safe arterial crossings for users of all ages and abilities, and provides wayfinding signage, transforming this 1.9-mile section of street between NE 52nd St. and NE 80th St. 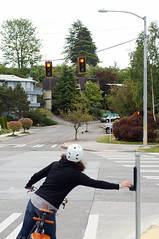 Sand Point Way NE creates a barrier and safety issue in this part of the neighborhood.  A once-difficult crossing between the Burke-Gilman Trail and Laurelhurst Elementary, NE 52nd Street gained a safe, family-friendly, dedicated traffic signal and crosswalk. Previously, people wishing to access parks, schools, and shopping on the other side of the arterial had to cross four lanes of high-speed traffic with no signal or other crossing treatment.

A new cycle path and sidewalk along the Seattle Children’s frontage provides a smooth link between Penny Drive and the newly improved crossing and a signal at NE 40th and Sand Point Way. The concrete sidewalk is five feet wide. The asphalt bike path is 10 feet wide (five in each direction). The project includes a large bus waiting zone at the midway point.

Below are two design options for the connection. Note that in both of them, the grove of sequoia trees will be preserved.

This option shores up a steep slope and creates a curving path to the trail. It takes up more land adjacent to the trail but the regrading of the steep slope provides places to plant native species including larger trees.

This option builds the path on a long concrete bridge mostly over the parking lot. It has less impact on the green area adjacent to the trail but as a trade off does not shore up the steep slope.

We hope to speak with you in person on Saturday if you can stop by Gould Hall.

Seattle Children’s has committed to spending nearly $4 million on transportation improvements in NE Seattle as part of our Major Institution Master Plan. We need you to help envision potential projects including:

Neighbors, employees and patient families can look forward to the streets around Seattle Children’s becoming easier and more comfortable to travel. After gathering and evaluating information for more than a year, we completed the final report for our Livable Streets Initiative. It paves the way for building five projects this year – including a new traffic signal at 40th Ave. NE and Sand Point Way NE and a bidirectional cycle-track with separate paths for bikes and pedestrians along our frontage with Sand Point Way NE.

Seattle Children’s and the city of Seattle will collaborate later this spring to conduct outreach to residents and businesses in the surrounding community about the proposed improvements.

The projects address the themes that emerged as we met with the community: improve access to the Burke-Gilman Trail, develop safer crossings at major arterials, and create streets, where traffic moves at slower speeds and pedestrians and bicyclists, are better protected.

“We’re excited to see our collaboration with the community and the city of Seattle enter this new phase and look forward to the great improvements that are on the way,” says Paulo Nunes-Ueno, who leads transportation planning at Children’s. “These projects will make the neighborhood more walkable and bikeable, but also healthier because they’ll help people stay active and reduce pollution by providing an alternative to driving.”

We have committed to spend nearly $4 million on neighborhood transportation improvements as part of our 20-year master plan and to spend an additional sum to support the 40th Ave. NE and Sand Point Way NE project. Sand Point Way NE is a barrier between the east and west halves of the neighborhood with Children’s on one side and the Burke-Gilman Trail on the other.

The traffic signal and a redesigned intersection at 40th Ave. NE will make it safer to cross the four lanes of traffic at this busy spot. The new intersection features many elements that maximize safety and improve operations, including video detection to allow more time for slower pedestrians to clear the intersection or to shorten pedestrian signal time if pedestrians and cyclists clear the intersection quickly, allowing traffic to move quicker. Planning for the trail connection will begin soon. “The whole thing is going to be a night-and-day improvement,” Nunes-Ueno says.

We are proud to share with you the Livable Streets Initiative Final Report. The report proposes projects that will accompany Seattle Children’s Major Institution Master Plan and will improve transportation in NE Seattle over the next 20 years. Hundreds of community residents and over a dozen community organizations and advocacy groups have come together over the last year to develop the Seattle Children’s Livable Streets Initiative with the goal of making our streets more livable.

In 2010, Seattle Children’s and our co-sponsors held a variety of events to gather input and ideas that now make up the concepts and projects in the Livable Streets Initiative Final Report. These events included a walking audit of the pedestrian environment in the neighborhoods surrounding the hospital led by Feet First, a local advocacy organization promoting walkable communities; a survey of cyclists by the Cascade Bicycle Club, a 13,000-member local organization promoting bicycle activities, advocacy, and education; and a large public event at Gould Hall in the University of Washington campus, where hundreds of participants shared their ideas and inspirations for how to make streets safer, more friendly and more efficient. In addition, community members made comments on an interactive web-map and submitted suggestions via email. The Final Report includes an appendix with each comment received through the events and the online resources.

We thought you might also appreciate links to the videos that we showed at the November 2010 workshop. Many of these come from Streetfilms.org, a fantastic resource for ideas and success stories:

As always, keep in touch with us on Facebook and thank you for your support! We can’t do this without you.

Thank you to Livable Streets Workshop Participants, Co-sponsors and Partners:

We truly appreciate your support through this process and at the workshops. We received hundreds of comments, gave away dozens of helmets and provided countless Skillz and Thrillz to little ones on trikes, bikes and scooters. Your continued support is crucial in now making sure that these projects get done. Please stay tuned for messages from us regarding next steps.

Participants from the City of Seattle included Seattle City Council members Mike O’Brien and Richard Conlin, Bill LaBorde (legislative aide for Tom Rasmussen), and staff from SDOT. Following the workshop, councilmember Richard Conlin joined more than a dozen bike riders to tour sites where we think there are opportunities to make improvements. We thank the council members and SDOT staff for their continued support.

Many of our Livable Streets partners and sponsors were at the workshops to provide information about the amazing services they provide.

Since the Livable Street’s Initiative launched in 2010 a host of awesome neighborhood organizations have formed to advocate for safer, friendlier streets. We have enjoyed our partnership with Seattle Neighborhood Greenways and especially with NE Seattle Greenways, our very own neighborhood greenway posse!

To learn more about the great work they are doing visit http://seattlegreenways.org/.

Also in This Section...